This is my sixth monthly public roadmap update for for Tanagram development (see previous updates here). I’m publishing this update to document my progress and hold myself accountable, and also provide a place to share some thoughts about what I plan to work on next.

Tanagram remains a nights-and-weekends project. My progress pace over the past month has been about 0.5 workday per week, a result of some distractions in my personal life.

I’ve spent the past month creating many more mock-ups of what I think Tanagram’s first-party UI could look like. As with last month, I’d like Tanagram to primarily be a canvas on which users can add and arrange small panels of data as needed; Tanagram itself would have very little pre-built/hard-coded UI chrome. Here’s some ideas, roughly grouped: 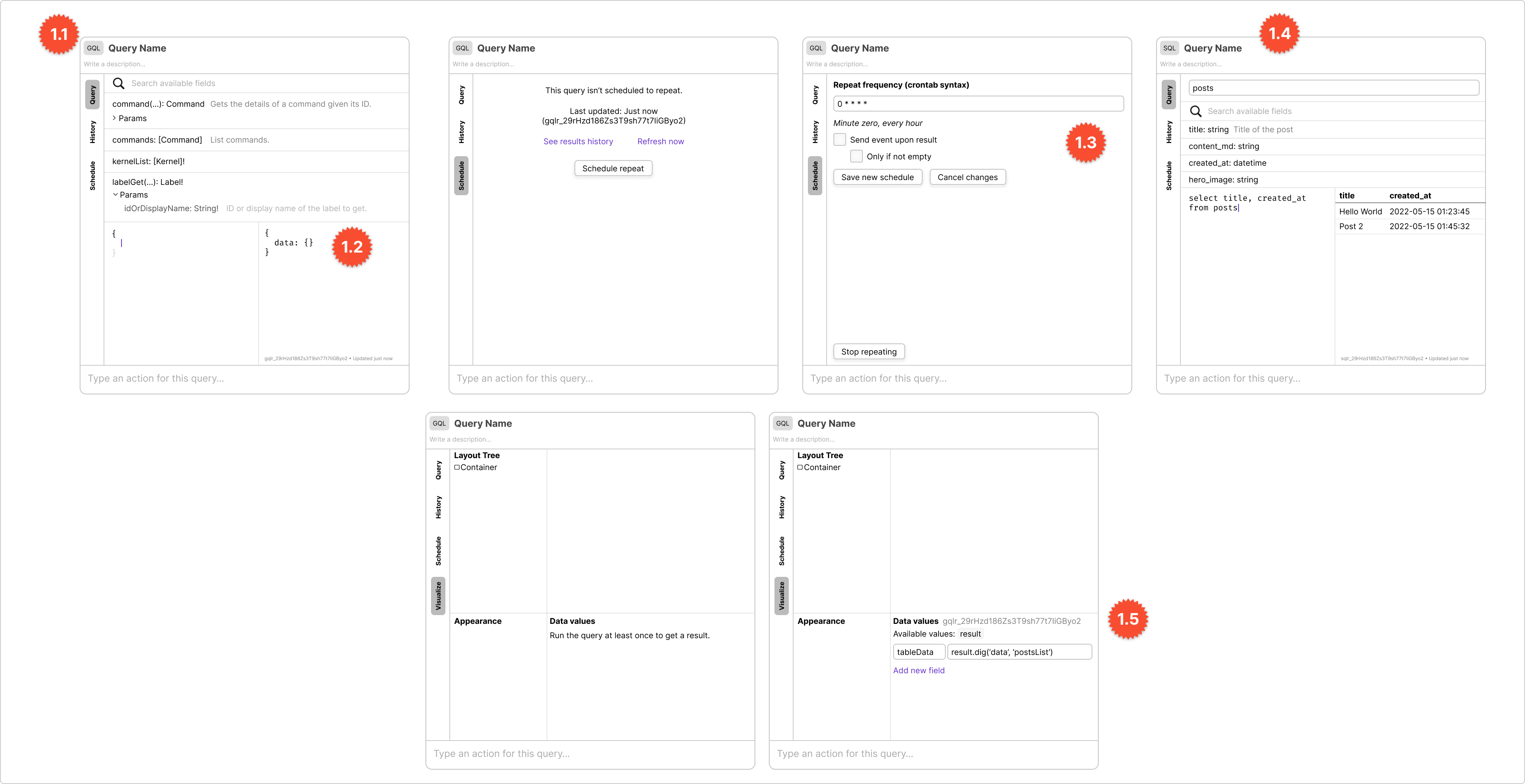 Everything in Tanagram is queryable. This includes user-defined data models, of course, but also Tanagram’s built-in items, including commands, events, and even queries themselves and their results. Events are the system primitive for “something has happened”. Commands and query results can trigger events at any time. I’m still figuring out the exact semantics and capabilities of events (e.g. are they broadcast to the whole system, or does it make sense to have private events? If so, how would private events be defined and used?). Events enable message passing/pub-sub behaviors, can be queried for metrics, and can be transformed into user-facing notifications. 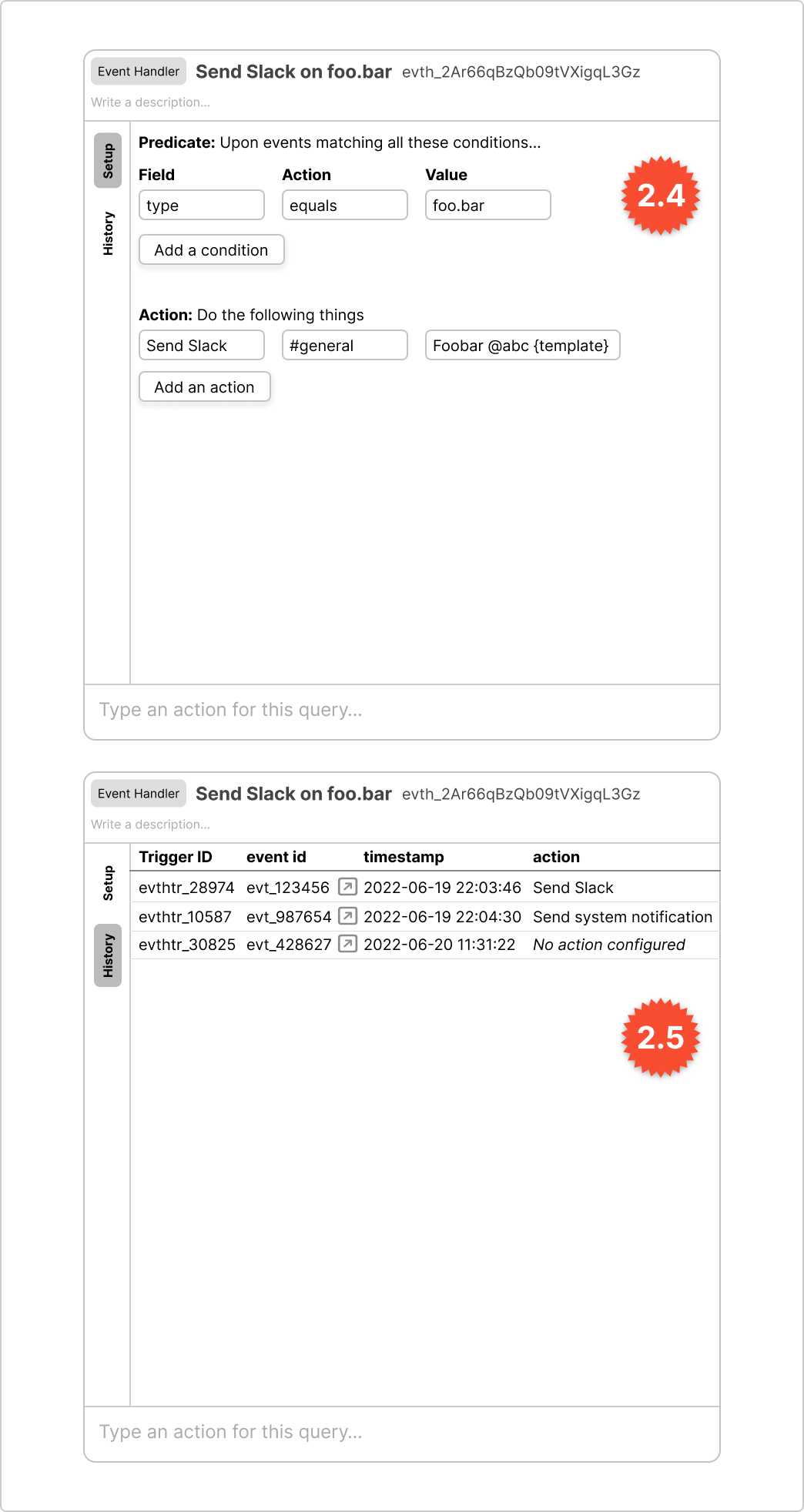 A datum is a named piece of information that can be addressed via an ID. At first glance, it’s like a constant or static config file in a codebase — the creator gives it a human-readable name and description, and can hard-code its values. But it’s also a regular data record, so it can be programmatically updated. A datum can therefore be a good replacement for a config file or codebase constant/literal that needs to be manually updated upon a routine change. Spaces are a way to group items into a logical set, typically corresponding to a single train of thought. 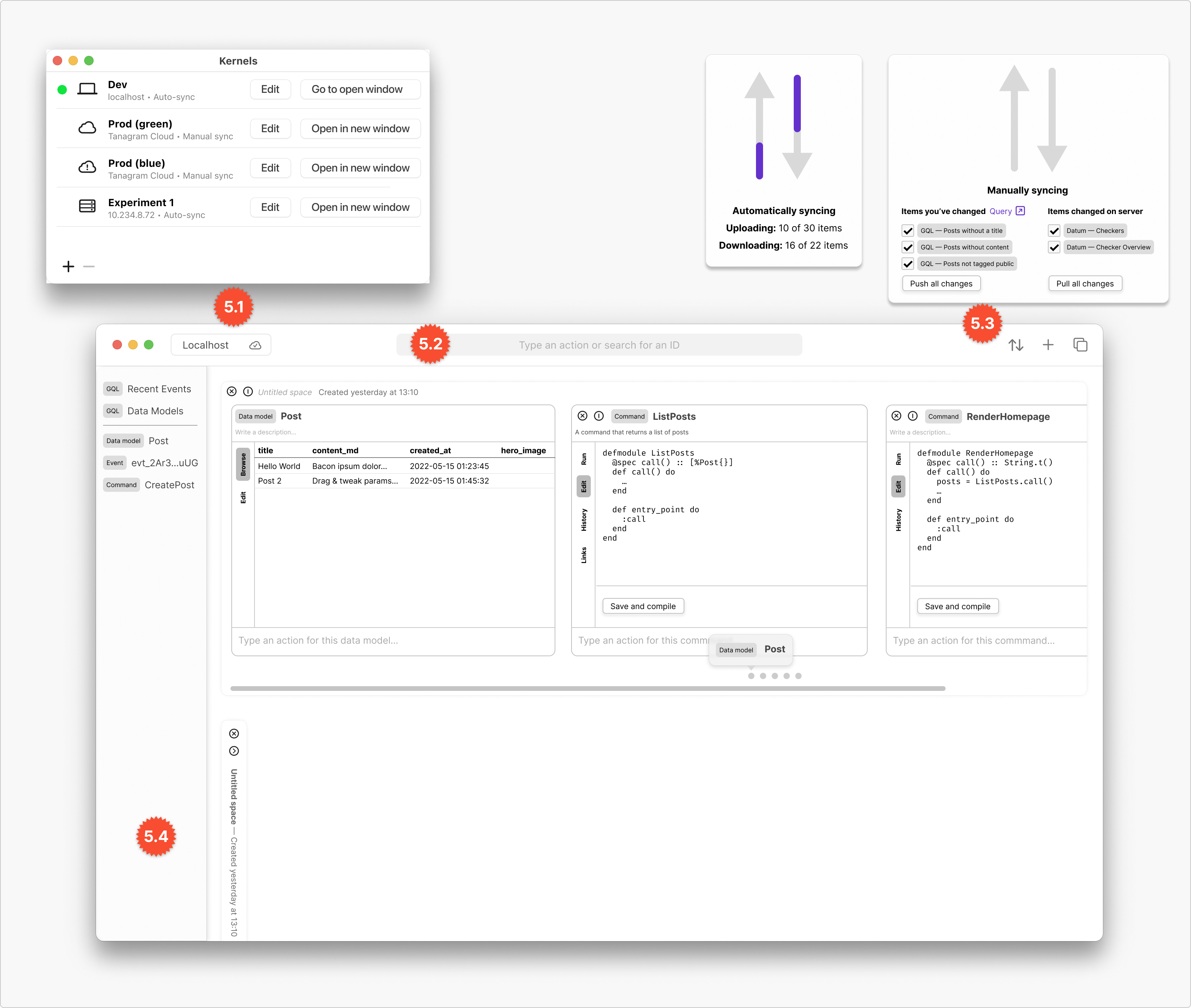 Tanagram’s UI primarily focuses on the main canvas, with a small amount of UI around it: The action bar provides a keyboard-driven interface to Tanagram functionality.

Checker is the name of a service used at my day job. In a nutshell, it allows developers to run a query (typically used to verify data integrity) on a recurring schedule and send an alert if an assertion is violated. A Tanagram user could quickly build something similar. Here’s what it might look like: 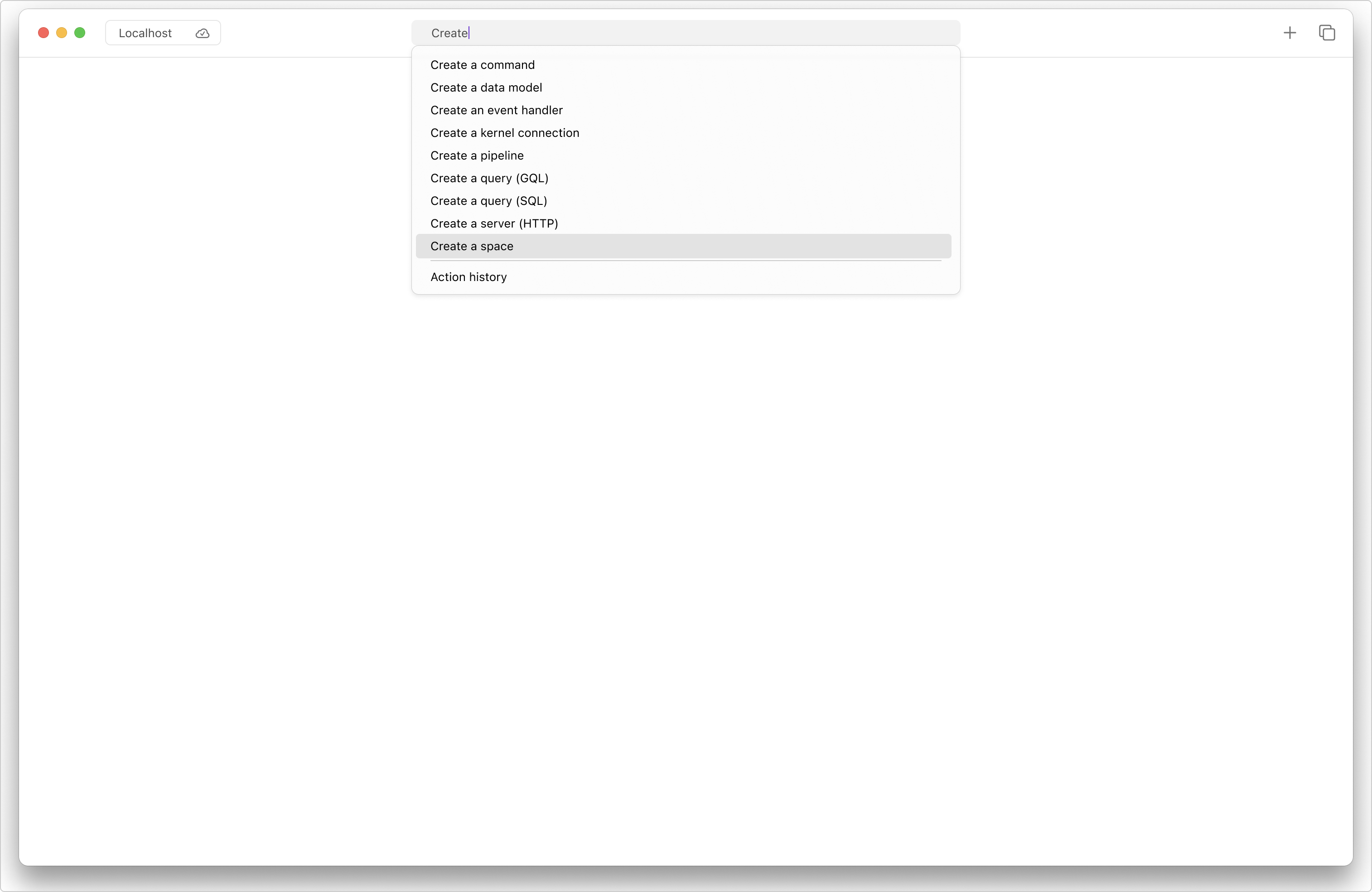 The user creates a space. 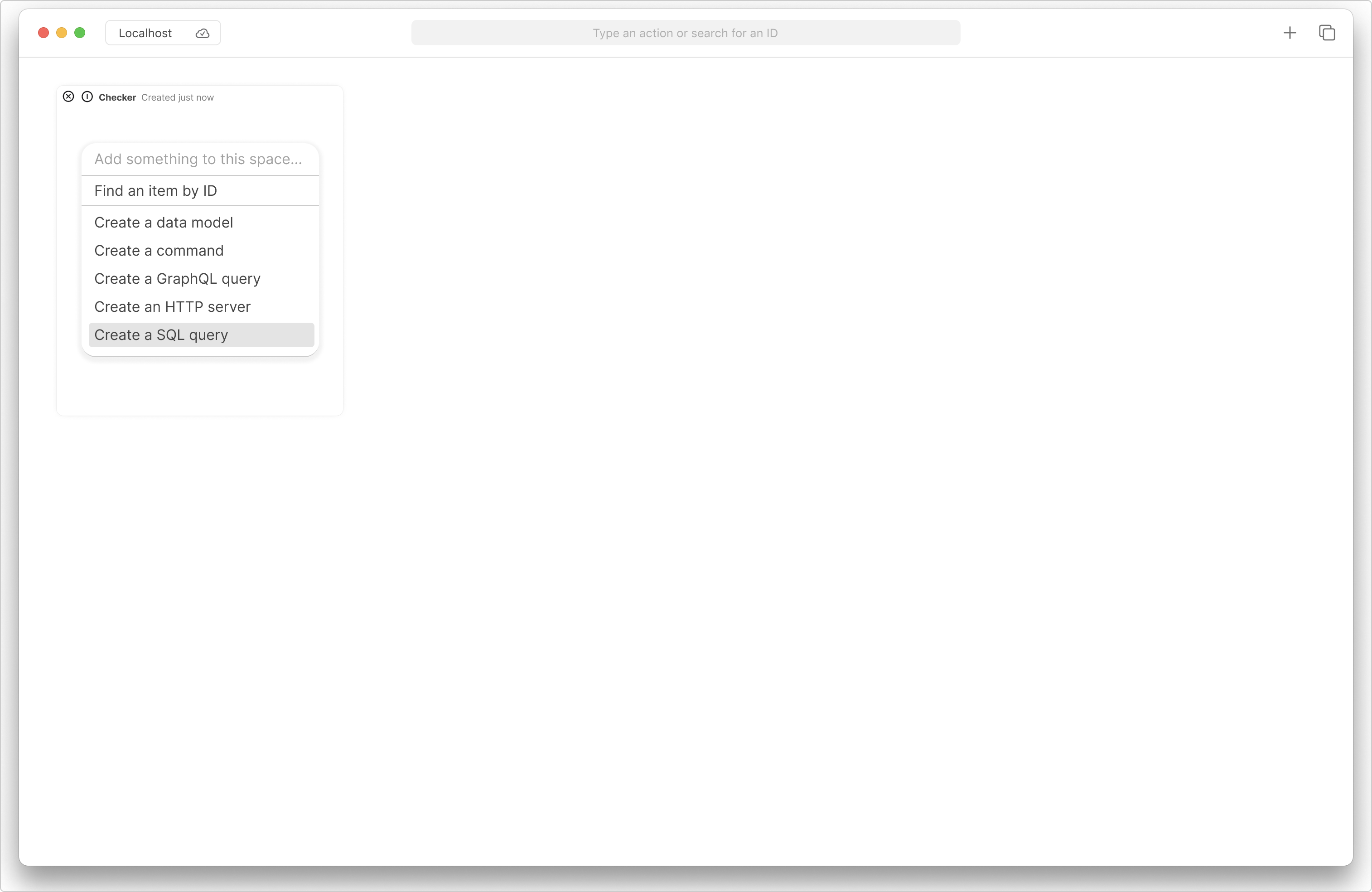 The new space is automatically populated with a menu of items that can be added to the space. The user creates a new SQL query and fills in the query itself. Often, the query checks that there are no results matching an erroneous condition. 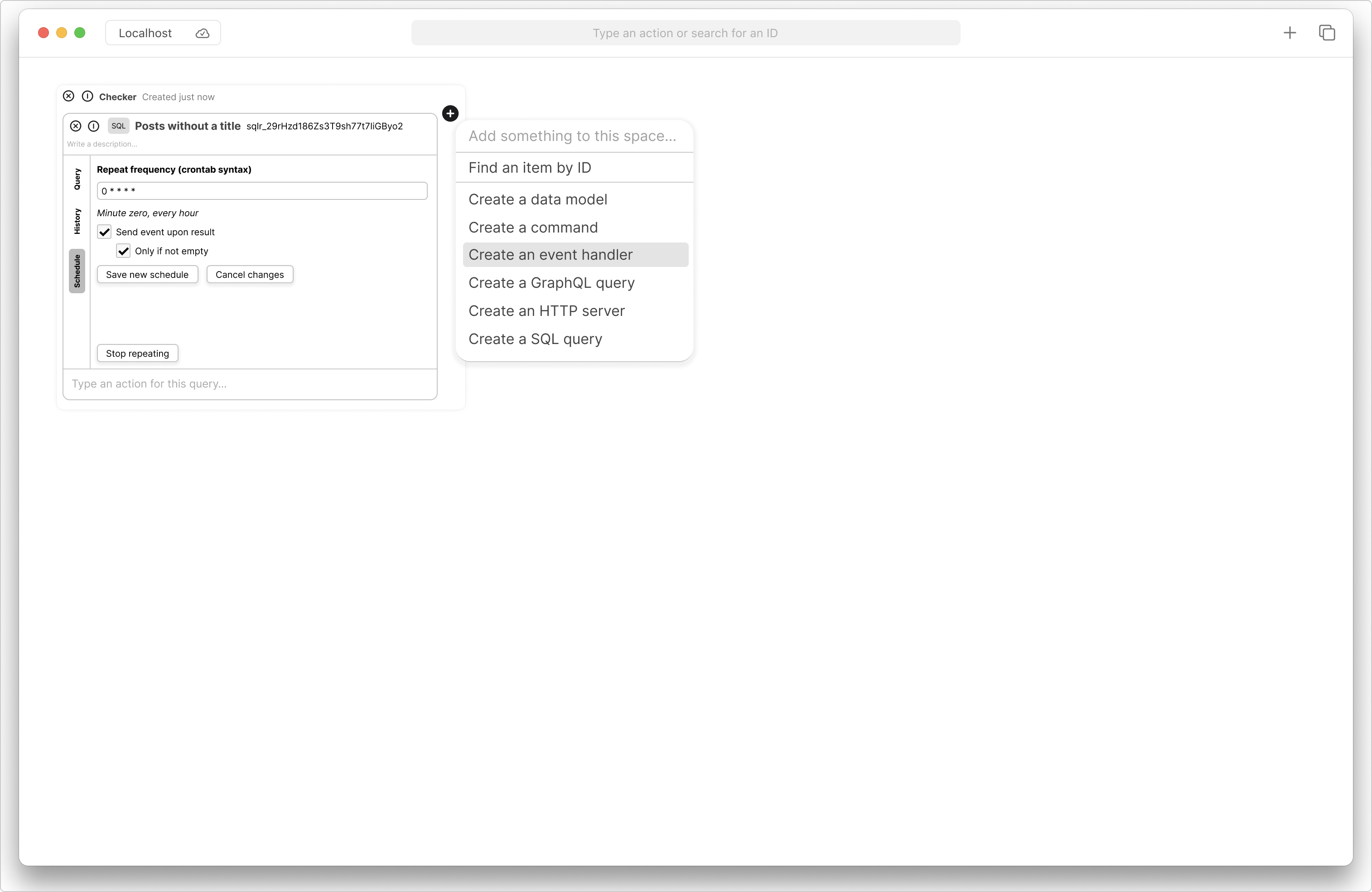 The user schedules the query to repeat hourly and send an event every time it runs if the result is non-empty. 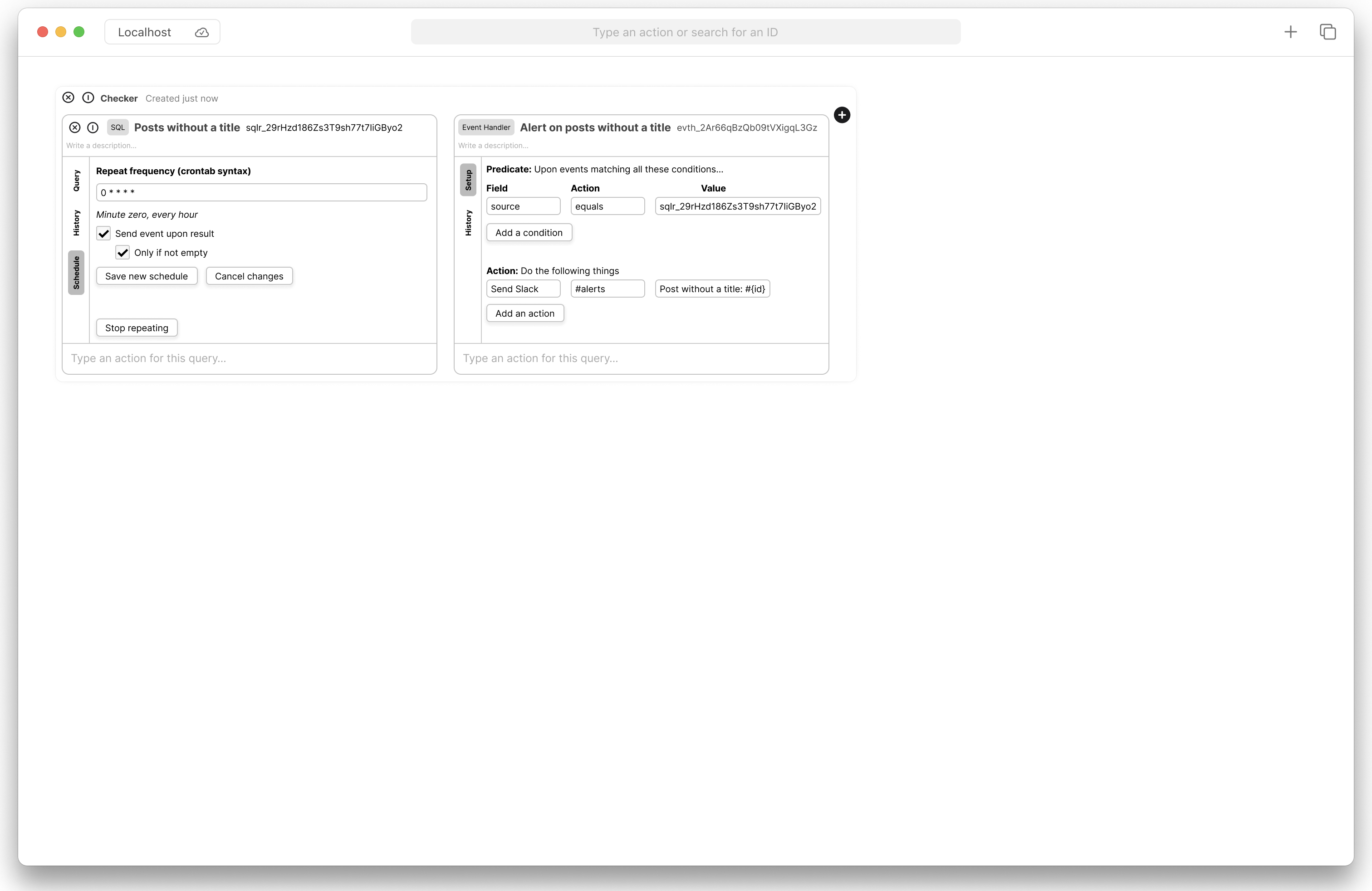 The user also creates an event handler, catching events from this particular query and sending a Slack message about the erroneous condition.

That’s it! It’s a simple version of checkers, built entirely with Tanagram’s built-in primitives. But we can make it a bit fancier: 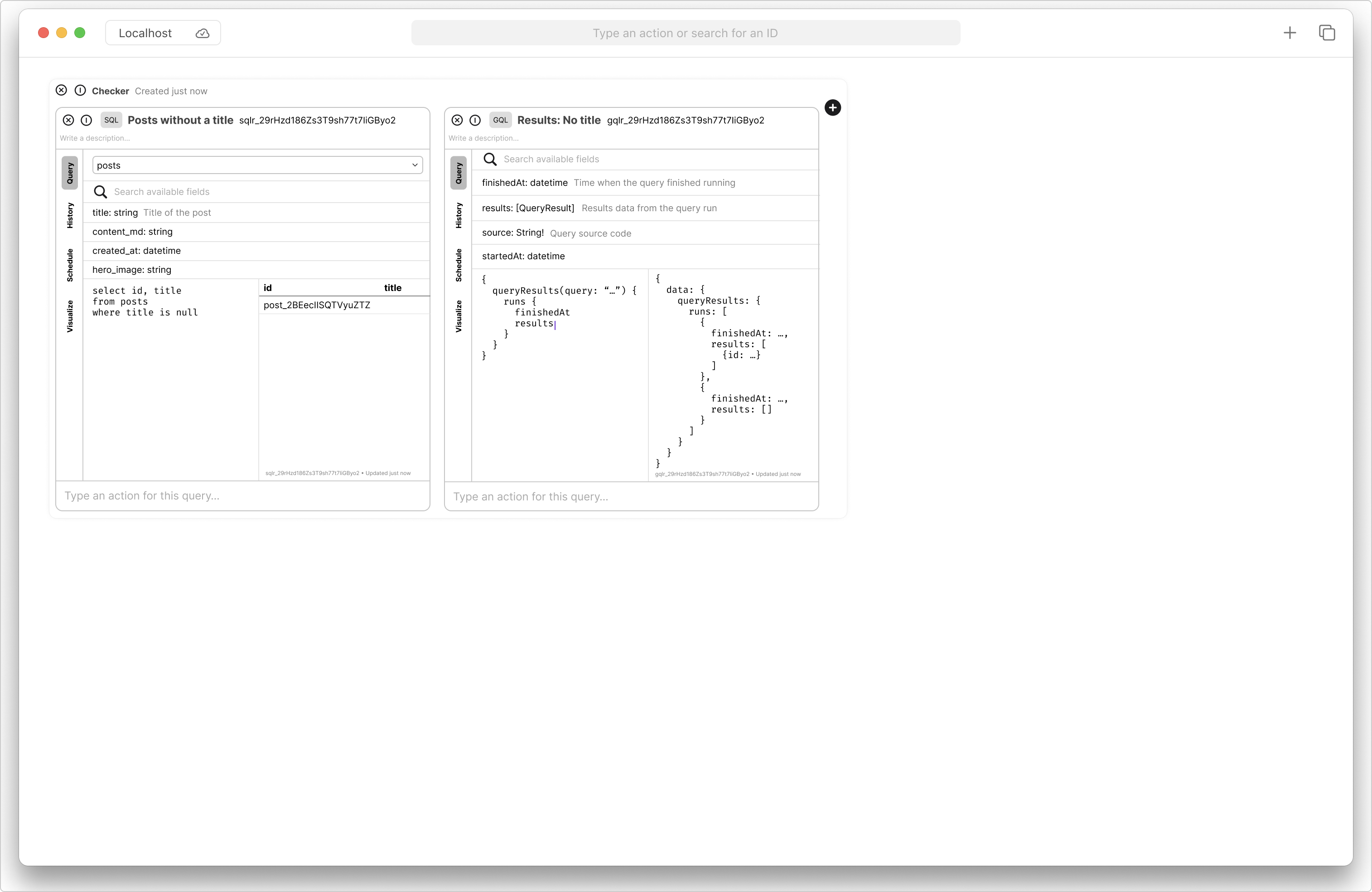 The results of these scheduled query executions are queryable. The user creates a query (using GraphQL this time) to retrieve execution results. 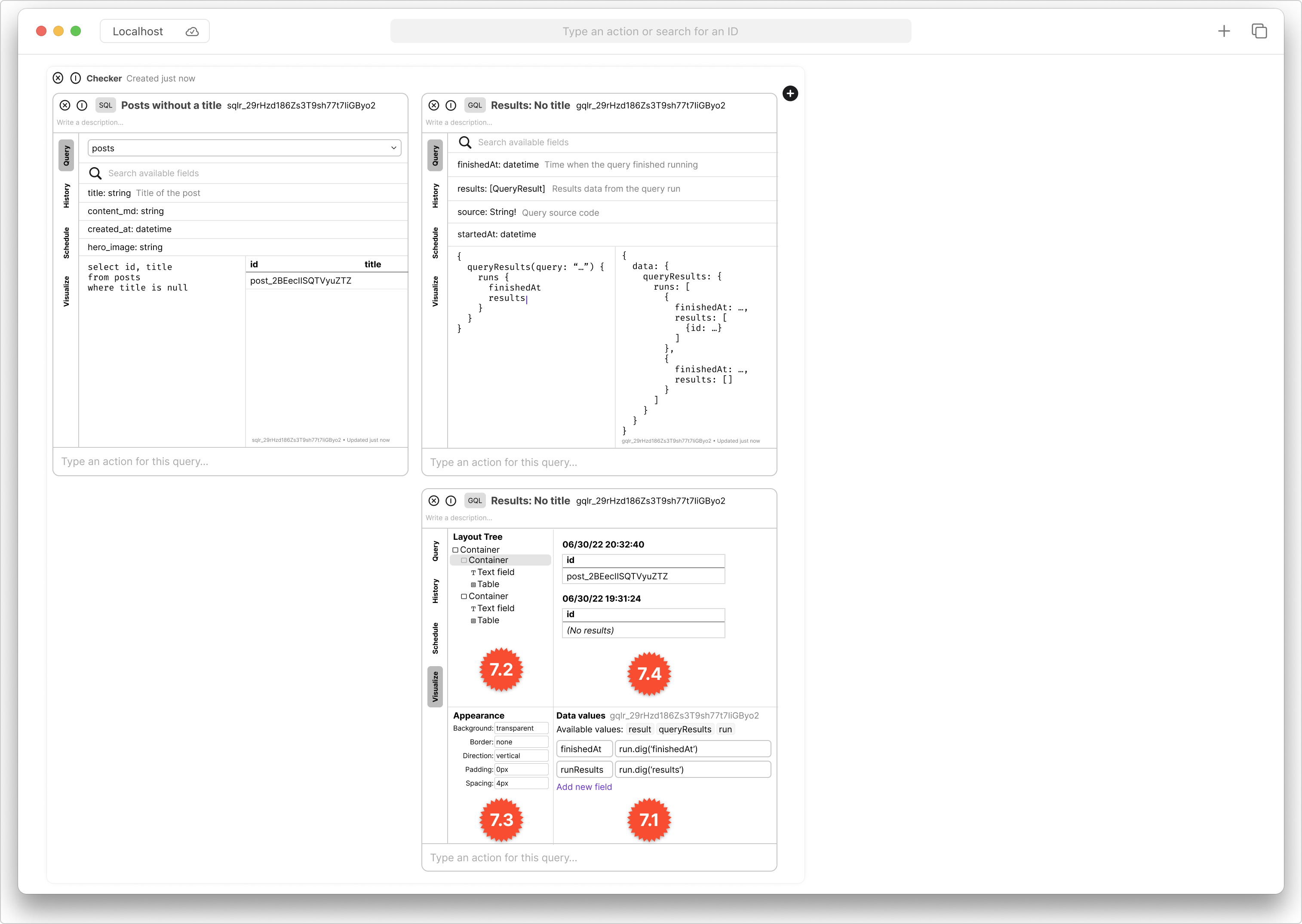 Then the user can transform these results into an interactive UI. Some things to note: 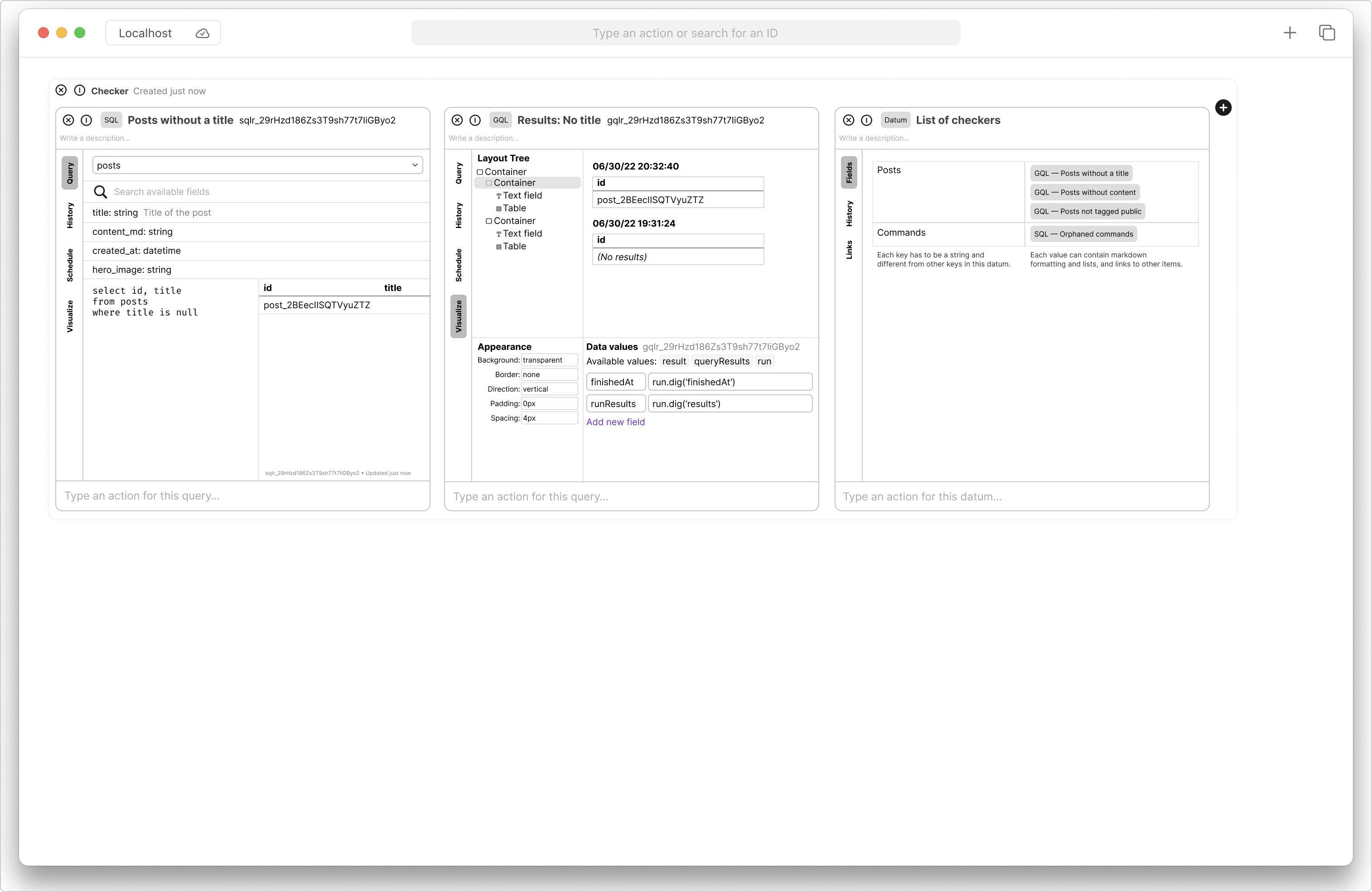 Finally, the user can keep track of a list of checkers using a datum.

There’s two more large areas I want to sketch some designs for:

After that, I’d like to start implementing some of these UIs in AppKit. This will let me get a feel for how these UIs actually feel to use, at least in terms of little interaction details. I’ve never built custom UI controls in AppKit before, so that should be a fun learning experience.